You’ve probably seen a very “hipster” new book floating around on Twitter and Instagram. The Catholic Hipster Handbook: Rediscovering Cool Saints, Forgotten Prayers, and Other Weird But Sacred Stuff is the brainchild of Tommy Tighe. Building on the success of his Twitter game, Tighe tapped a team of “hipsters” (and ME!) to create an outside the box tool for the New Evangelization.

Being a Catholic Hipster is all about an attitude–an attitude grounded in being part of a countercultural community of believers dedicated to something bigger than themselves in a world dominated by self-centeredness. It’s about yearning to learn more about the faith by seeking out “Catholic cool”–overlooked saints, forgotten prayers and feast days, and traditional practices long set aside by mainstream believers. The Catholic Hipster podcaster Tommy Tighe will help readers rediscover everything awesome about the Catholic faith.

When Tommy approached me to be one of the contributors to this book, I was pretty sure he’d dialed the wrong number. No one has ever inferred to me that I’m in any way “hipster”. That being said, I LOVED my work on this book and have had a blast reading it and getting to know my co-contributors. I think you’ll love it too! 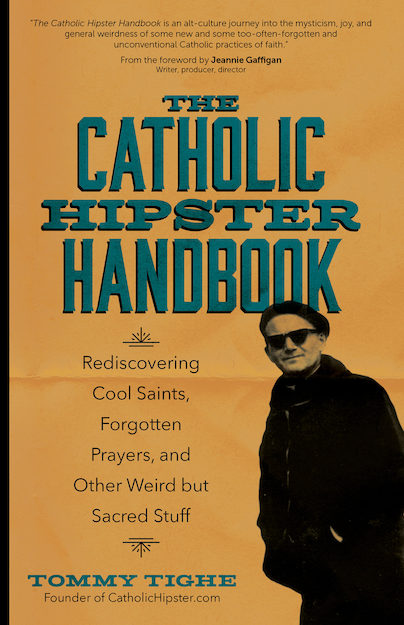 Q: Congratulations on the publication of your new book Tommy! Please briefly introduce yourself and your family to my friends here at the blog.

Thanks, Lisa! I’m a cradle Catholic, married father of four boys who enjoys making jokes on Twitter, praying the Liturgy of the Hours, and all of the sudden I have this little book!

Q: We’ve been following you on Twitter, laughing out loud and occasionally wincing since 2014. What inspired you to morph your 140 character or less quips into a full fledged “handbook”?

Despite how it feels, Twitter is a tiny little bubble. It’s a tight bubble, but a tiny bubble nonetheless. I try to use my Twitter account to share all the awesome work others are doing for Christ and His Church, especially folks most people haven’t heard of before, but the time came to expand to the Non-Twitter crowd. Now we have a whole book that is working hard to reclaim Catholic Cool!

Q: What will readers find in the book that they can’t find in any other Catholic book?

First off, a foreword by the one and only Jeannie Gaffigan. That has to be one of the book’s crowning achievements. Delving deeper, readers are going to find a great sense of humor and an incredible balance of living in the culture but not being of the culture. The book covers everything from Farmers Markets to Daily Mass, everything from beards and glasses to the Divine Office and Adoration. Where else are you going to find that kind of mix? 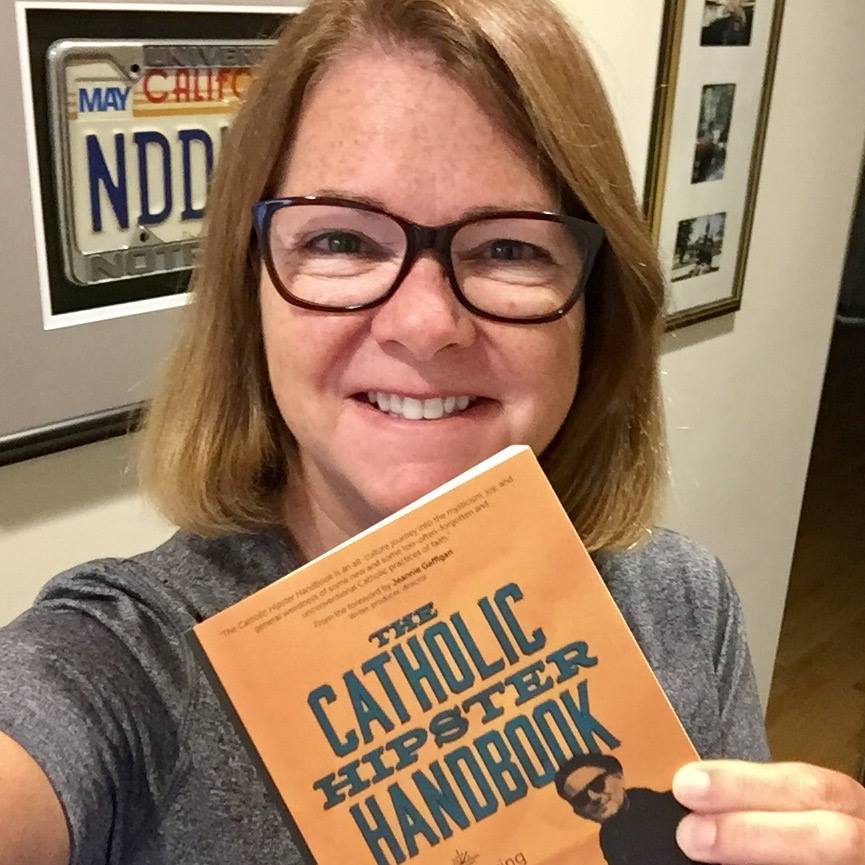 Q: I’m pretty sure I’m the non-hipster affirmative action pick for the “salon” of voices you have in this book. How did you decide on who to include here and why does the multi-author form of this book underscore its cred as a “hipster” resource?

The contributors were all included based on their social media presence for the Church. You may consider yourself a “Non-Hipster” but when you consider what it means to be a Catholic Hipster, you’re top notch! When I started working on the book, I sent out a bunch of Twitter direct messages to people who I admired for living the faith authentically and who regularly showed how cool it was to do so, and they all said yes!

Q: One of my favorite parts of the book is the awesome foreword by Jeannie Gaffigan. Say a few words for us about why you wanted her to be a part of this book (and how you pulled that off!)

Jeannie is incredible. She’s the epitome of being truly Catholic and yet appealing to the broad culture with her humor. She’s a proud Catholic Mom of a large family and yet people take her seriously and listen to what she has to say. I’m still trying to learn how to walk that line of being considered normal in today’s world while also being really Catholic (which can look pretty weird to the outside world, at times, if we’re honest with ourselves). As to how i “pulled it off”, it was literally a direct message on Twitter. I didn’t even expect a reply, but here we are! Jeannie is amazing and getting to know her (even briefly over social media) has truly been a blessing.

Q: To be serious for a moment, we’ve prayed quite a lot for your family and your precious Luke over the past few years. This book was written during a very challenging chapter of your family’s life. How did working on the book help you to focus on your faith walk?

First off, thank you. Thank all of you! The prayers that we received during our experience were so powerful and so deeply felt. It was the most difficult experience of our lives and continues to be to this day, but it was also the experience where we felt the presence of God and the Church more than any other in our lives. It was so nice to have a creative outlet that allowed me to step away from the pain and enter into a lighthearted exploration of the faith. When you’re suffering, it helps to have a way to escape for a bit, and this book gave me that opportunity.

Q: What are your hopes for the book? How do you expect folks to respond?

I didn’t really have any hopes initially, to be honest, but recently I received a review from a former Catholic who said the book reminded her that the faith was bigger than the select few Catholics who drove her away from the Church and now she’s interested in looking more deeply at Church history. I was stunned. I would never have expected a book like this would have that impact. I’m hoping that the book presents an easy and non-threatening way to learn about the faith, and if it brings a single person closer to God and His Church, I would be happy beyond my wildest dreams.

Q: How would a true Catholic Hipster go about sharing this book as a form of the New Evangelization with a friend or loved one who is not connected to the Church, their faith, or the hipster lifestyle?

I really like the idea of leaving this book around for people to pick up. We’ve seen that happening on social media in popular culture and it’s made a big splash. Other than that, push it out on social media! This whole book was born from Catholic social media and it’s only natural that it gets shared with the masses in the same way!

Karen and I recently signed on with the incredible team at Word Among Us Press and are writing a manuscript tentatively titled “How To: Catholic Family” that is expected to be released in 2019. We’re super excited about the opportunity to share our experiences as a growing Catholic family, all the ups, all the downs, all the joy, and all the pain. Other than that, I’ll just keep cracking jokes on Twitter and hoping it leads people to Jesus!

Check out The Catholic Hipster Handbook: Rediscovering Cool Saints, Forgotten Prayers, and Other Weird But Sacred Stuff and support this blog with your purchase

Tommy Tighe is a Catholic husband and father of four boys. You can find out more about him at CatholicHipster.com.