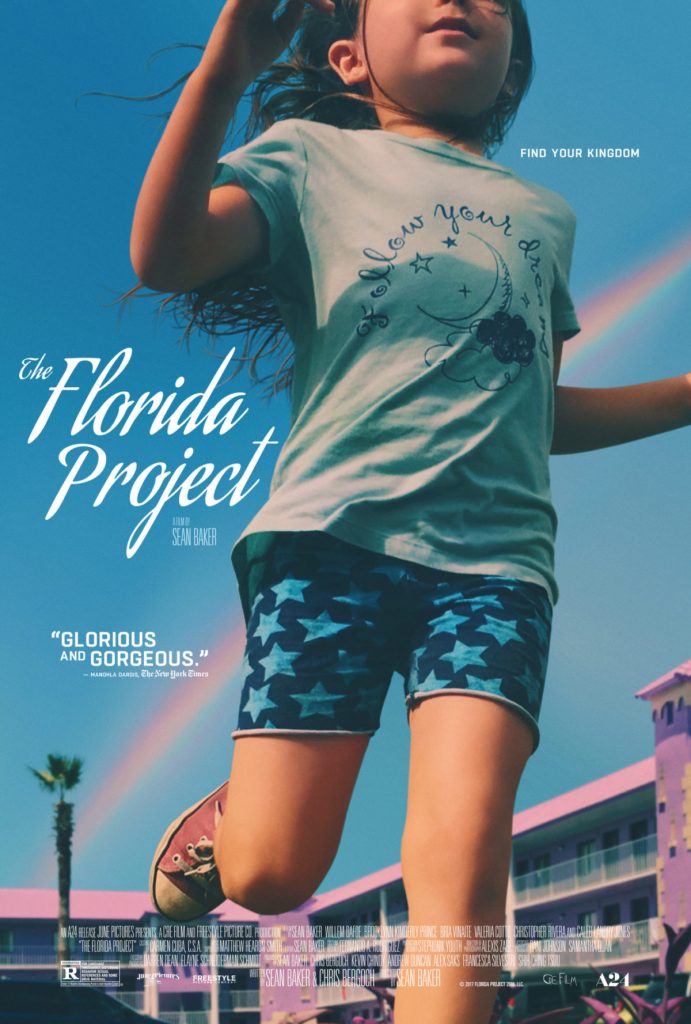 I was recently invited to review and attend a press junket for the new film The Florida Project. This stirring movie opens October 6th in Los Angeles and New York. When it hits theaters nationwide in a few weeks, I will be sharing a full review.

For today, I wanted to tell you about the experience of interacting with a few very talented members of the team behind what I’m calling one of my favorite films of 2017.

Halley and her 6-year-old daughter Moonee live in a motel that’s managed by Bobby, a man whose stern exterior hides a deep reservoir of kindness and compassion. Despite her harsh surroundings, the precocious and ebullient Moonee has no trouble making each day a celebration of life. Her endless afternoons overflow with mischief and grand adventure, while her mother soon finds herself exploring increasingly dangerous options as a way to keep them both alive.

One kid’s no-limits playground becomes her loving mom’s prison of despair. Along the way, we fall in love with Moonee, Halley and their broken yet compassionate caretaker Bobby. Expect to laugh, to cry, to cringe and to walk out changed. Magical!

When I screened this film, I sat in the theater next to my friend, “Media Nun” and Daughter of St. Paul Sister Nancy Usselmann. As the credits rolled, I sat stunned with questions whirling through my brain. I turned to Sister Nancy, anxious to get her reaction and we had an awesome post-film conversation. Fortunately, I also had the chance last week to ask some of my big questions when I interviewed Director Sean Baker and stars Brooklynn Prince (Moonee) and Bria Vinaite (Halley).

First and foremost, let me say that the irony of conducting these interviews at a beautiful hotel in Beverly Hills was not lost on me. That will make more sense to you when you see the film. But suffice it to say that at its core, this is a film that is supposed to rattle us, to make us feel uncomfortable with the status quo.

So into that beautiful backdrop of LA luxury walk two actors who while working together for the first time have an onscreen chemistry that supercharges this movie. In meeting them off-camera, it’s interesting to see how Brooklynn Prince (Moonee) and Bria Vinaite (Halley) mentor and care for one another, and why what we see in the film works so well.

Theirs is a story of contrasts. While Brooklynn’s career has spanned half her (albeit short) life, Bria was only recently discovered by Director Sean Baker on Instagram. She debuts with Willem Dafoe (Bobby) in her very first film. Bria and Brooklynn walk in and greet the waiting room of journalists. It is Brooklynn who takes the lead immediately. She may be pint-sized, but she is seasoned. Plus she’s witty, incredibly intelligent, and off-the-hook talented. Her responses to our questions highlight the fact that as one of the focal points of this film, Moonee’s is the one perspective you should never forget or lose track of. I also completely loved that Brooklynn recounted to me that her favorite scene was the one where she got to spit on cars. When you see the film, remember that!

Bria Vinaite may not be as talkative as Brooklynn, but when she speaks there is both a force and a sweetness to what she shares. Of working opposite Oscar-nominee Dafoe, Vinaite is magnanimous in her appreciation of his mentoring and on-set support. Of her relationship with Brooklynn, her on-screen daughter, she is compassionate, supportive, and most of all totally bonded to her costar. I immediately have a deep sense of the “spiritual motherhood” we often speak of between women. Both actors understand the importance of what they have created together. At moments, it’s clear that as in any mature mother-daughter relationship, Bria and Brooklynn take turns leading and following. This may be the first time we see Bria on screen, but it definitely won’t be the last.

After our chat with the actors, it’s time for us to meet Director Sean Baker. Best known for his work on Tangerine (shot entirely on iPhone), Sean shares in equal parts about the art of this film and its mission: to bring greater awareness to the issue of homelessness and struggling families in Florida. These families may live adjacent to “the happiest place on earth”, but they teeter daily on the brink of destruction and despair. What Sean has created with The Florida Project is not easy to watch, but needs to be seen.

During our conversation, Sean shares his long-held desire to make his own modern version of Our Gang (also well known as the “Little Rascals”). My mind flits to childhood memories of that series, remembering the giggles and gags. After some time, I realize that with The Florida Project, Sean has emulated Hal Roach’s groundbreaking work by inviting viewers to see the children at its heart as our guides for the true lessons to be learned in this movie.

In my mind, what Sean Baker has created works well on every level. When we watch this film, we laugh, we cry and–unless we totally disassociate ourselve with what we see–we are changed. Mooney and her fellow “rascals” become our guides into a completely different perspective on what “magic kingdom” can mean.

This film is R for language throughout, disturbing behavior, sexual references and some drug material. I will share my full review soon, but urge you to put this on your personal “must see” list for October.