Opening in theaters this week, Change in the Air is the quiet (literally) type of film that’s unlikely to make major headlines. When I screened it, I wasn’t honestly even sure if I’d review it because I’m swamped this week and a bit overwhelmed by some family issues. But even amidst that busyness, I simply couldn’t get Dianne Dreyer’s unexpectedly haunting film out of my mind. And precisely because this film deals with the messiness of real life, Change has stayed with me all week. I find myself needing to write about it, and hoping you’ll see it too so we can discuss it.

Here’s a look at the Change in the Air:

It’s an ordinary day on a quiet suburban street when an old man, Walter Lemke (M. EMMET WALSH) decides to deliberately step in front of an oncoming car. Reporting the accident is a woman named Wren Miller (RACHEL BROSNAHAN), who has just moved into the neighborhood. But when police officer Moody Burkhart (AIDAN QUINN) knocks on Wren’s door to ask for her statement, she hides. Wren’s arrival proves most vexing to Jo Ann Bayberry (MARY BETH HURT), who returns from a birdwatching expedition with her husband Arnie (PETER GERETY) to find her neighbors quietly buzzing about Walter’s accident and the new woman on the block. There’s even more confusion when postal carrier Josh (SATYA BHABHA) starts delivering large bags of letters to Wren, who mostly keeps to herself. Jo Ann takes it upon herself to be a good neighbor and investigate Wren, reporting her findings to anyone who will listen, including the local music teacher Donna (MACY GRAY) and Walter’s patient wife, Margaret (OLYMPIA DUKAKIS). Meanwhile, Arnie finds himself stunned to see a rare, exotic bird in his own yard, just one of many signs that something important in the world is changing. Finally, Jo Ann does the unthinkable and starts reading Wren’s mail. What she discovers surprises her, and leads her and those around her to some profound realizations about life as they know it. CHANGE IN THE AIR embraces the imperfections that make us human, offers a way to set ourselves free, and asks us all to take a good, long look at the wild birds in the sky. 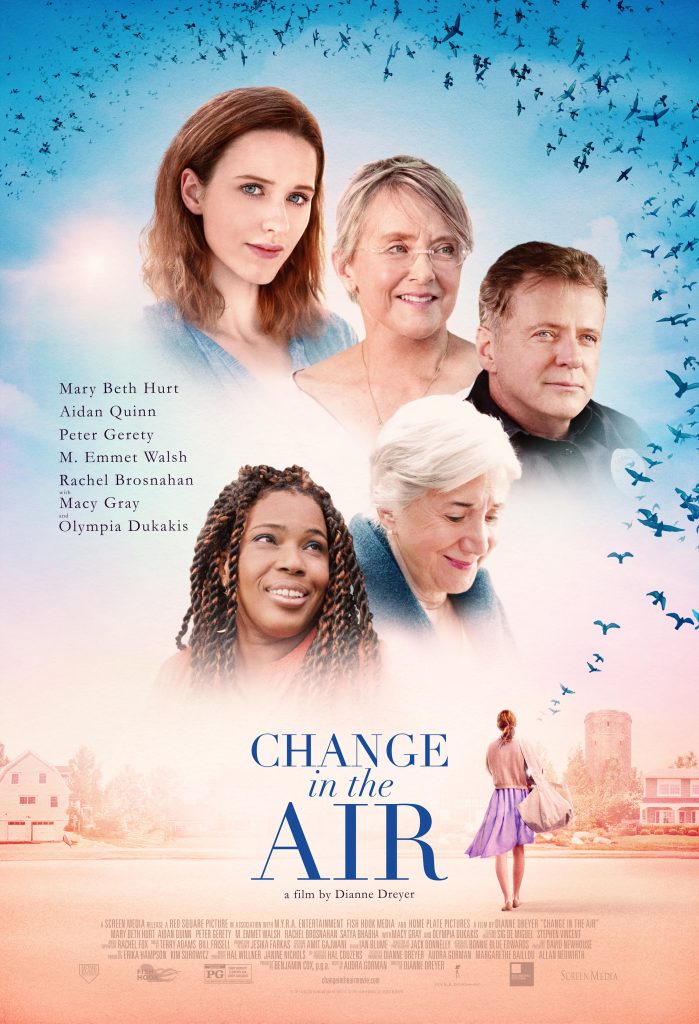 I was initially interested in Change in the Air because it features one of my favorite actors, Aidan Quinn. Adding in the chance to see Rachel Brosnahan in a movie hooked me too, but if you’re looking for Mrs. Maisel here, you’ll have to look elsewhere. In many ways, Brosnahan’s character “Wren” is the antithesis of Midge Maisel. Brash, bodacious humor is traded for a character who draws us in with her subtlety. We know immediately that there is something going on with Wren, but we have to wait quite a long time to discover her true story. And in the end, I found myself deciding that for each of us who watch Change in the Air, Wren’s story may be different because we encounter the stories of others through the prism of our own. So what you experience at the end of this film will likely be different from what I did. I don’t want to usurp your experience or spoil anything, so I’ll leave the ending up to your personal interpretation.

What’s not up for debate is that Wren moves into what appears to be a pretty typical neighborhood. But just like our own neighborhoods, behind suburbia’s doors and shutters are personal histories being written every day. These histories are filled with fun and memories, but also with hardship and crosses to bear. Inside our homes are aging parents who need looking after, drinking problems or other addictions, and hurt in the form of broken relationships. There’s all too often loneliness, which is so hard to understand when we live out our stories surrounded by other people. Sometimes, the mundane day-to-day routine of life renders us numb to the pain and need of those living in closest proximity to us.

Change in the Air is an unusual film in that its story evolves so slowly. At the heart of the drama is Wren and all of her mysterious allure. She is lovely, but she is also a mystery. And as much as her neighbors try to understand her story, they–and we–don’t get a fuller picture until the very end of the movie. And even then, we will encounter Wren’s presence through the prism of our own spiritual perspectives.

I found myself thinking about this quiet, luminous story over the last few days while caring for a loved one who has just had surgery. Every time I whispered a quiet prayer for my loved one, I would think about a moment at the climax of the film and smile. You’ll know that moment when you see it for yourself. Today, I decided that perhaps instead of a movie, Change in the Air could have made a wonderful longer format series, where we encounter each of the characters’ stories in greater detail as we consider them in the context of their relation to Wren, but more importantly to their neighbors. Many of the stories here are heartbreaking, made all the more so because they are the fabric of real life.

Major “beachballs” go to Mary Beth Hurt for her portrayal as nosey neighbor Jo Ann. We all think we know a Jo Ann in our lives, the one who is always sticking her nose into our business. Hurt’s Jo Ann gives us a glimpse behind the facade and into the pain that drives Jo Ann’s brokenness. Birders will love this film as ornithology takes center stage in the plot. Fans of Macy Gray will be entranced by her vocal work here. For me, that was at it’s finest when her character signs a heartbreaking version of  “His Eye Is On The Sparrow”.  I love a movie that shows real emotion, even when it’s painful.

Jellyfish (stuff to watch out for!):

Change in the Air is rated PG for some thematic elements and brief language. To be honest, I can’t recall the instances of “language”, but some moviegoers will want to know about a suicide attempt scene that plays out at the very beginning of the film. This may be a trigger for sensitive viewers. Also, Jo Ann Hurt’s alcoholism is not hidden like her omnipresent bottle of booze, but her husband seems to enable it by not confronting his wife’s drinking but instead helping her hide the evidence. Surely, he acts out of love. But one wonders if Arnie might be actually more loving if he offered to help Jo Ann seek treatment for the massive depression that drives her to drink and that has actually endangered the life of a child.

I recommend making the effort to see Change in the Air for its character-driven drama that provokes thought and encourages you to ponder your own story in the context of your real life “neighborhood”.