Confinement: A family's chat room is hacked by an online stalker, but it crosses the line into reality when their ten-year-old son is kidnapped.

With many of us sheltering in place, "Zoom" has become a universally recognized way of life. So I was naturally intrigued when filmmaker Nicole Absinio approached me about a new project involving technology and terror. Confinement tells the tale of what happens to one dysfunctional family when their chat room is hacked by an online stalker. The mess that ensues is riveting. Amazingly this film was entirely created in remote locations during the pandemic. Nicole Absinio joins us today to discuss her vision for the project and the logistics of bringing it all together. 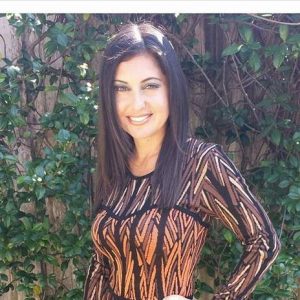 Nicole Abisinio is a Catholic producer, actress, writer, and speaker. She is best known for producing films such as The Investigator, acting opposite Bill Murray in Jim Jarmush's Broken Flowers, and marketing studio films including Hacksaw Ridge and I Can Only Imagine. Nicole's new book on purity, Pure Power, was recently published by TAN Books.

Congratulations on the upcoming release of Confinement. Please share how this idea came to you.

It came to me during the quarantine.  Someone called to tell me an old movie of mine had been re-released from eleven years ago. It reminded me of when I was at my most creative. I didn’t have any “rules” of movie-making back then. I purely shared what I was trying to say to the world with the medium of film, without worrying about what it needed to be or what lines I had to draw in. I used to color completely outside of the lines. And it was so beautiful. I wanted to create like that again.

So I went to the adoration chapel in prayer and that’s where the idea was born. A lot of it is actually inspirations from my life-believe it or not!  That’s probably partially why it’s ringing authentic to those who watch it.  My mom was a detective while I was growing up and that was tough because she was often in dangerous situations. I have been stalked before so I had a lot to draw from there, and recently, my church friend’s pre-teen daughter was online hacked and later kidnapped, so all of that poured out of me into this story.

Overall, I really felt called to make this movie during COVID. To turn darkness into light…that’s what Jesus does. I asked him to use those negative experiences and this quarantine crisis. However, I must say, the idea could only be born because God also then provided me with an amazing team. A generous and talented team that shared that creative spirit and a fighting spirit to bring truth and light out of chaos and darkness.  God is in everything and he’s always working behind the scenes, no matter how chaotic things are at the time.

Your production was definitely inspired by the COVID 19 pandemic, but production was also impacted by it. How were you able to pull off filming during this time of social distancing?

Miracles abound because, in human terms, there were too many things that could have gone wrong.  We had to shoot from 4 locations simultaneously each shoot night and also needed to have our cast and crew together on group video conference through the entire process. That sets us up for a lot of technical unknowns that could have completely ruined the entire film.  And yet somehow-we ended up with every single shot we needed.

I have to give major credit to the incredible patience of our cast and crew. It was an intense and time-consuming process. The actors had to also actually become crew since we had sound and video devices at each of their locations.  The poor editor was receiving footage from eight different sources instead of one!  The director got stuck logging all the footage coming in from all the different cameras. I know they definitely wanted to give up at times but they persevered. I think each of us involved knew that something very special was happening. Sometimes we go years waiting for that level of collaboration and creativity on a film. It was magical! 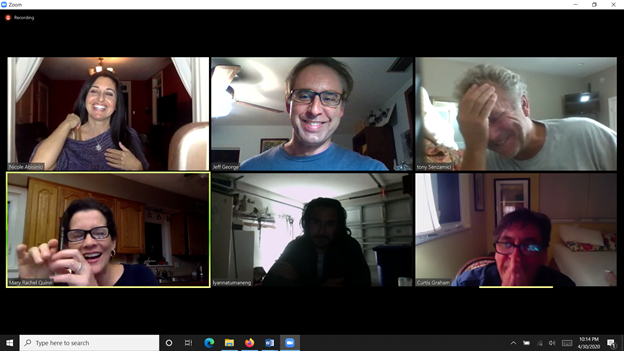 The cast and crew of Confinement during production

Confinement is definitely a thriller! Along with being the film's producer, you star alongside a terrific cast. What fueled your emotional performance?

Oh wow, great question.  Most of all, drawing on my own experiences before my conversion. Before my faith conversion, I was so broken from extreme exposure to evil in the world. I had so much buried emotion in me from those worldly wounds.  This role was a dream because I was able to use all of that for this character. Interestingly, I’m better at drawing out those emotions now that those parts of me are healed and balanced from my faith journey. It was harder to draw out those emotions when you live in them or when you bury them so deep.  It’s better now, because they are just filed memories or battle scars.

I have to ask about the actors who work alongside you here. I was quite concerned about “Tony”, who portrays your father and who is quarantined with COVID. How was he able to play his illness so convincingly?

I’m laughing so much right now because he really did! Tony took direction really well! Curtis and I kept saying “we need you to be sicker…sicker!”  He fought us a bit as the rough tough rugged guy that he is, but he really did give an amazing performance. All of the actors did and I think that is a big part of what makes this movie so compelling.

I asked Tony directly and his personal answer to that question was:  “Many actors will use a variety of methods such as past experience and imagination.  For my character it was a combination of both. I also had to create the fact of my son was being abducted and my wife was in jeopardy as well.” 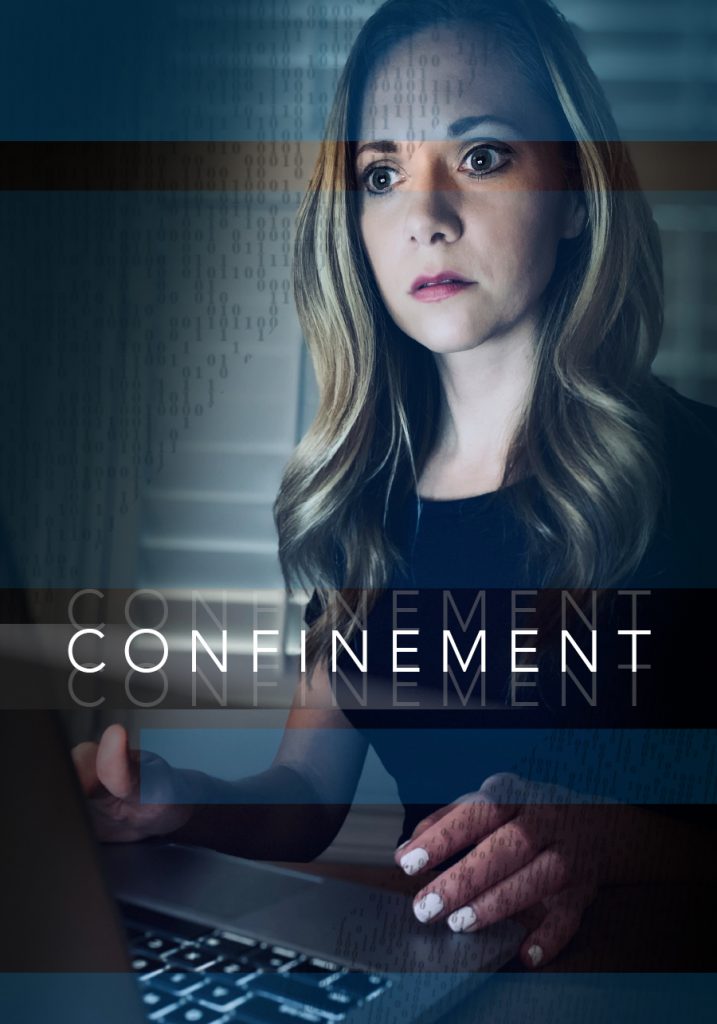 At its heart, Confinement looks at family relationships. Both Chris and Nicole are badly broken by family wounds. What are you hoping viewers will take away from watching the film?

Trauma, like the characters go through in the film, can eat a soul alive, but if we can overcome that pain of what has been done to us or what we have done to others, if we allow God into our hearts, minds, and souls to heal those wounds, then there is no stopping the greatness we can achieve…or the love we can have in our lives.

“Love your enemies…and do good to those who persecute you.”

How and when can viewers watch Confinement?

Releasing July 15, 2020, on Tubi exclusively for a handful of weeks. We chose Tubi because with COVID, we knew it would be a hardship for our audiences at home to pay for entertainment. Tubi is the #1 streaming platform and paid for by advertisers so stream Confinement freely, for a limited time!  Enjoy it!

The exact link for the movie, going live July 15th will be https://tubitv.com/movies/539759/confinement.

I hope our supporters know how powerful they are with their clicking power.  Please do take the time to click the link and watch faith-friendly movies.  The more we prove that there is a demand for clean films-without cursing or nudity-the more movies like ours will be made. Help us show the world faith-friendly films matter and the more our film trends, the more the message of mercy gets out to the secular world nationwide!