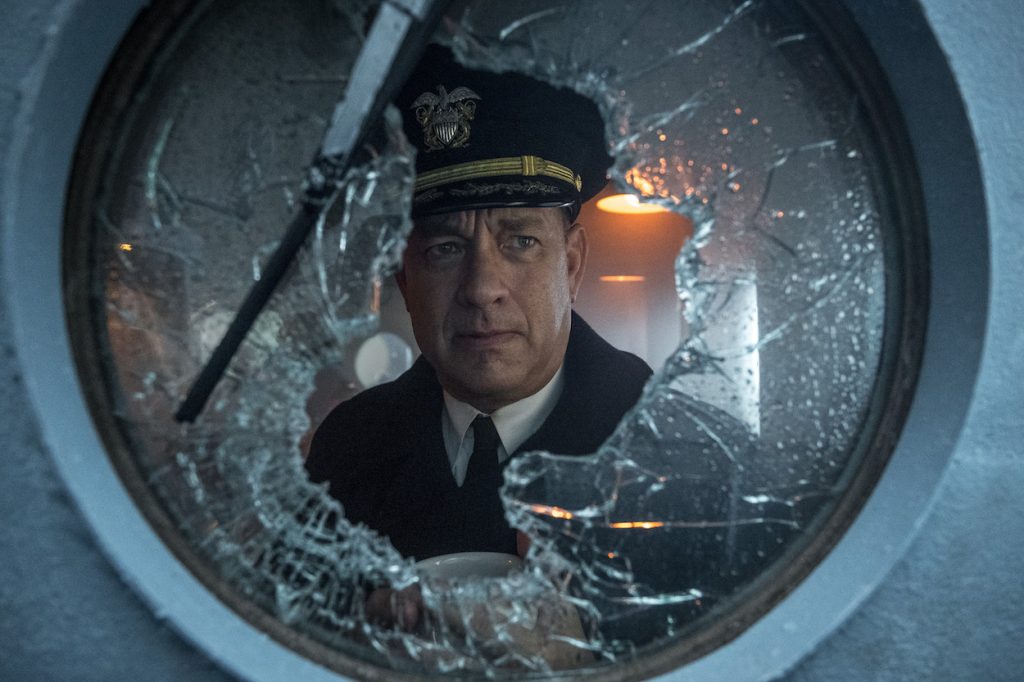 When I found out that Greyhound would be opening this weekend on Apple TV+, I was excited. The film combines two of my favorite things: Tom Hanks and source material from C. S. Forester. Since I'm the mother of two sons who were entranced with any content related to history, our family went through a huge Horatio Hornblower phase. Forester is best known for his fictional tales of naval encounters, including the tales of dashing naval officer Horatio Hornblower. For Greyhound, Hanks came across a used copy of Forester's book The Good Shepherd and took his time adapting the story of the Battle of the Atlantic into the screenplay that ultimately became Greyhound.

Tom Hanks stars as a longtime Navy veteran who, as a first-time captain, is tasked with protecting a convoy of 37 ships carrying thousands of soldiers and much-needed supplies across the treacherous waters of the Atlantic during World War II. For five days with no air cover, the captain and his small force of three escort ships must make their way through an area of the ocean known as “the Black Pit,” battling Nazi U-boats while protecting their invaluable ships and soldiers. “Greyhound" is inspired by events during the Battle of the Atlantic, which took place in the earliest months of America’s alliance with Great Britain and the Allied Forces. Stephen Graham, Rob Morgan and Elisabeth Shue star alongside Hanks. “Greyhound" was written by Tom Hanks, directed by Aaron Schneider and produced by Gary Goetzman.

If you're not a fan of military films, there is still much to enjoy about Greyhound, but you'll have to work a bit to dive into some relatively hidden gems in Hanks' script. The film moves at a brisk pace. With only a 91 minute runtime, we dive almost immediately into the bulk of the action as it unfolds aboard the naval destroyer the USS Keeling. Expect to be submerged into almost non-stop combat.

But before we follow Captain Earnest Krause aboard his first military command, we meet him in a hotel lobby in San Francisco where he exchanges Christmas gifts with his beloved Evelyn (Elisabeth Shue). Earnest's gift to Evelyn is a lovely Christmas ornament with the phrase "Yesterday, Today, Forever". This reference to Hebrews 13:8 "Jesus Christ is the same yesterday, today, and forever" will recur. It gives us an initial glimpse into the deeply held faith of Krause, who not only kneels to pray devoutly but also pauses in prayer prior to any of the many meals he skips while at the command of the Greyhound.

Lisa Hendey calls #Greyhound with @TomHanks a film with important lessons of courage, perseverance, and faith. Streaming now on #AppleTV+ Click To Tweet

Krause wants Evelyn to travel with him and become his wife, but her gifts to him, a pair of monogrammed slippers (watch for these later in the film!) and a tiny replica of the Greyhound, reminds us that Krause's duty calls. With the exception of this glimpse into the Captain's land life, the rest of the action plays out aboard the ship. I actually wished that the film's ending could have given us the completion of Earnest and Evelyn's life together.

The only other real amiable portion of the film is an ongoing relationship between Krause and Messmate George Cleveland (Rob Morgan), who dutifully tries to prompt the Captain to eat by placing meals in front of the commander. Cleveland's commitment, shown in a pivotal point in the battle, is duly noted albeit never verbally acknowledged by Krause. But his recognition of Cleveland's heroism becomes obvious in an emotional scene involving burial at sea.

The bulk of the action about the Greyhound involves a scrappy crew employing relatively primitive technology to protect and defend the convoy from a terrifying pack of Nazi U-boats. During my screening, I decided to turn on the captions to make sure that I could track the dialogue while my husband used every ounce of our home theater's sound system to bring the sensation that we were under enemy siege in our own living room to life. The CGI effects and sound of the film truly place the viewer right aboard the Greyhound. It's a wonder I didn't become seasick.

While definitely a military action movie at its core, Greyhound is also an examination of perseverance, commitment to own's duty, and of enduring faith. Viewers who are paying attention to the relationships between Krause and his men, his devotion to his service, and his courage under fire will be reminded that we live amidst men and women who have--in real life--given their all to protect and defend. Greyhound examines a portion of World War II that may have been previously unknown to many of us. Its reminder to seek out stories of the past to better live our future is a welcomed message.