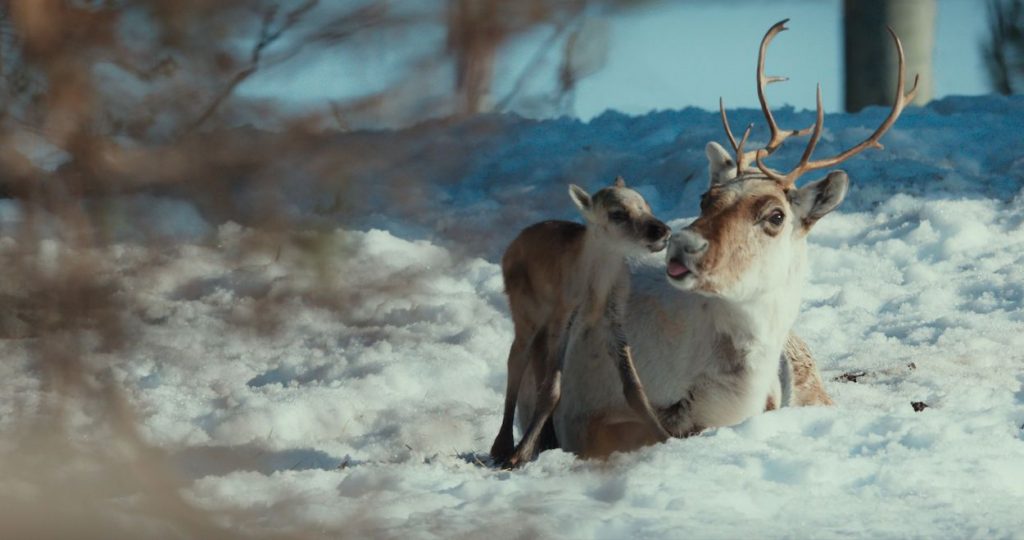 Meet Ailo, a newborn reindeer who embarks on an incredible odyssey with the help of his mother. Narrated by Donald Sutherland and set against the frozen majesty of northern Finland, their journey is an uplifting story for the whole family.

The sweeping aerial images that dramatically play across the screen of A Reindeer’s Journey beckon us into the starkly beautiful vistas of Lapland. As the film’s original score by Julien Jaquen captures my heart, I feel suddenly transported from my cozy couch in Los Angeles into Finland’s frozen tundra. I know immediately that I will experience a work of great beauty, a treat for the eyes, the ears and the heart. Suddenly I lament the fact that I’m streaming the film on an iPad with AirPods, rather than in a theater with surround sound. But the reality of this viewing experience doesn’t really begin to sink in until I meet her--Ailo’s mother--nostrils flaring and head bared against the freezing wind. A mother myself, I want to know her story.

Captivating and breathtaking #AReindeersJourney @ScreenMediaFilm opens soon in theaters and on-demand. Catch @LisaHendey's review, meet and journey with Ailo and his herd in Finland. http://areindeersjourney.com Click To Tweet

Our introduction is quickly made by Donald Sutherland, the narrator of A Reindeer’s Journey, who serves as my guide and travel companion for this 86 minute odyssey.

“The world is a strange place,” Sutherland charmingly observes in his opening monologue. “No one knows why we’re here and yet every morning, we have to get up, get going, and find our place with everyone else. But some days, we just feel like staying in bed and dreaming the day away…” Surely, Ailo’s mom, heavy with child, would rather stay put than trudge headlong into the punishing wind and ice. But trudge she does, bringing us along for this first stage of the journey. 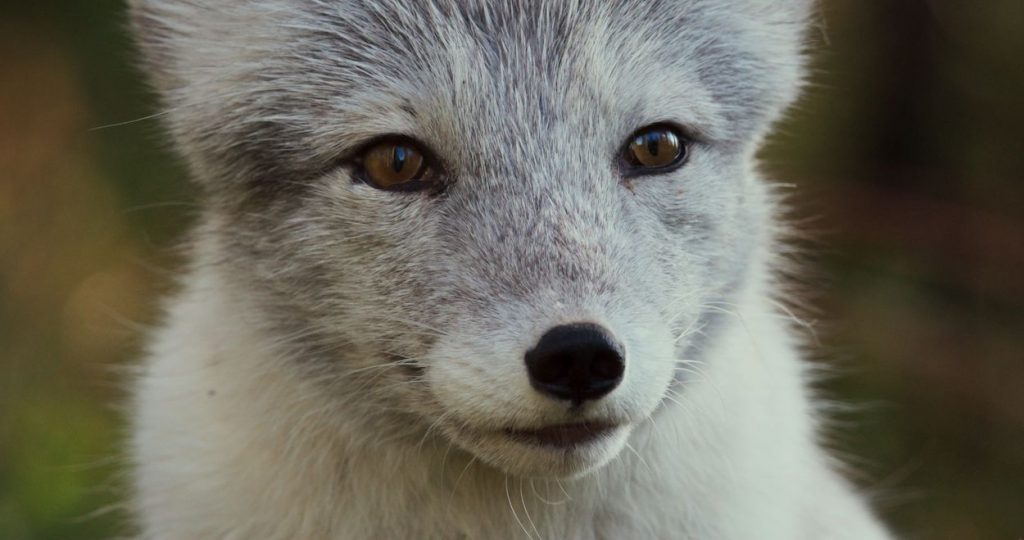 And just like that, I am charmed. For the next two hours, I watch as this courageous mother separates herself from the herd with whom she travels. The rising of the temperature and the movements of her body have signaled the start of her labor. Ailo’s mother will not make it to the herd’s traditional birthing grounds. Here, alone, miles from her ultimate destination, she courageously labors. Ultimately, we meet the object of her struggles: little Ailo, the precious newborn baby reindeer.

Immediately, Ailo faces the first of many life hurdles that will come his way along this journey. He must first learn to walk. Ancient lore, recited by Sutherland, gives the leggy creature, still wet from birth, only moments to take these first baby steps. We witness not only his struggle to make his legs work properly, but also his mother’s departure. Will she really leave him and rejoin the herd? Is her own survival really more critical to her than the life of her precious newborn?

These early moments point to what’s at the heart of A Reindeer’s Journey: the unique opportunity to observe God’s creation at its most magnificent and to consider, even if only for a few moments, just how alike we are after all. 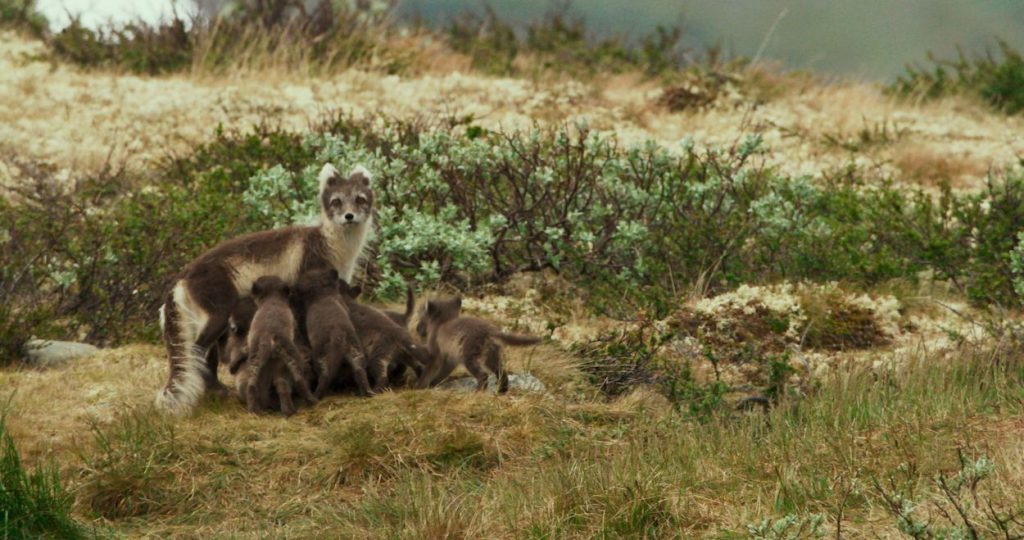 Sweeping cinematography, both from an overhead perspective and with stunningly high definition closeups, draw us into Ailo’s journey from those first precarious steps into adolescence, the perils the herd must face collectively, and ultimately into his eventual maturity. Along the journey, we meet a delightful cast of characters--sometimes cute, sometimes creepy--and witness their mutual endeavors to survive.

At the heart of A Reindeer’s Journey is the constant reminder that as people of faith, we are called to be partners in caring for creation. This point is often underscored in a subtle fashion. Ailo’s mother gives birth, perhaps somewhat prematurely, when the warming climates trick her body. The artic fox, whose kind is endangered, must scramble and compete for a mate. Domesticated reindeer fall prey to the hungry wolverine who sees them as easy victims since their natural instincts have been dulled into submission. The evil logging machinery, which in this film takes on the villainous appearance of an almost monster-like apparition with eerily headlamp “eyes”, disrupts the migration patterns of the reindeer whose centuries-old routes are now being plowed under and harvested.

If the message of conservation and climate change are less than subtle to grown-ups watching A Reindeer’s Journey, perhaps this film has accomplished its purpose well. Children watching may be temporarily alarmed by scenes of hunting or pre-mating rituals, but gratuitous liberties are never taken. We do not see the gore. In fact, one of the most uncomfortable moments for me was watching little Ailo struggle against unseen but definitely heard buzzing swarms of mosquitoes. The “circle of life” does happen in nature. Donald Sutherland’s voice-over work makes it sometimes fun, sometimes suspenseful, but always engaging.

Some viewers may see anthropomorphism present in the film as we, Ailo’s co-travelers on the journey, are time and time again invited through the narration to consider our own lives mirrored in our growing hero and his fellow travelers. But while the imagery is occasional “cute” (for example when a lemming is called by Sutherland the “chicken nugget of the Arctic”), it is also breathtakingly beautiful. A scene toward the film’s climax affords us dramatic views of the Aurora Borealis (Northern Lights). I found myself rewinding to witness over and over this mystical experience of the wonder of God’s magnificent handiwork.

Extremely young viewers or those who prefer tight action scenes may find the pacing of A Reindeer’s Journey too plodding. But for the rest of us, the journey is sheer delight.